Magic in the Mountains with Megan Robinson

Brittany and Justin had a Park City wedding that needed no frills or thrills, just the magic of the love that they shared for each other. With the help of their loved ones, and of course their pups, they blew their own expectations for their wedding out of the water. After having an incredible celebration in the mountains, Brittany still asks Justin if they can do it over again. Keep scrolling to read their love story and gush over every perfect detail!

Star crossed high school sweethearts, Brittany and Justin, met in Boxford, MA and briefly dated before attending college in Boston. After reconnecting in college, they made a big move in their relationship (and life) and traveled across the country to settle down in Park City, Utah. After living there for 4 years they decided to make things a little more permanent.

Before marriage was even on the table, they had decided to start looking into purchasing their first home in Park City. They had toyed around with the idea for a while when they found a neighborhood that they both loved. One Summer night, June 3 of 2017 to be exact, Justin and Brittany went on a bike ride with their friends when they came across a neighborhood with freshly prepped lots. Seeing the space, they began to entertain the idea of building from the ground up.

After driving around and scoping out potential lots, Justin dismissed the idea of building a home. Brittany was left confused but that quickly changed when Justin surprised her by telling her that he had  bought the house she originally loved, in total secret! Brittany told us that she was in total shock and disbelief, and on top of everything that happened in those exciting 10 minutes, Justin still wasn’t finished.

“He told me to get out of the car and that he had another surprise,” Brittany shared. And yes he did- a sparkly surprise in fact.
Down on one knee in front of Brittany, he asked her to marry him. What a whirlwind of surprises… one would say dream come true, wait until you see their wedding! (Spoiler: She said yes!)

Blue Sky Ranch was the perfect setting for the relaxed-barn wedding that Brittany wanted. Brittany was never a wedding daydreamer when she was younger, but she and Justin both knew when they walked into the venue that it was the place they were going to say “I do.” Her goal of having a relaxed-barn wedding was achieved with a palette of whites, beigey pinks and greenery. The simplicity of the natural wood tables within the barn gave guests a comfortable feel when celebrating, creating no obstacle for having a good time throughout the evening.

Justin and Brittany both wanted someone they knew to officiate the wedding, so Brittany asked her younger brother to officiate. “I gave him the choice since that can be rather nerve wrecking,” Brittany shared. ”
But he accepted, became officiated online and did an amazing job!” There were also two more special guests that they had to feature in their wedding to make the day that much better, hint: they each have 4 legs!

Lenny and Olive, their “4 legged children,” were escorted down the aisle but Justin’s brother and Brittany’s sister. They did a great job, don’t you think?!

The bride and groom’s first dance was to the classic 70’s song,  “Into the Mystic” by Van Morrison. With the help of their band, Changing Lanes Experience, there was a lot of dancing throughout the night. So much dancing that Brittany missed out on the s’mores bar!

Since most of their guests coming from back east, Justin and Brittany had to show them what Utah was all about. With the mountains and scenery setting the mood for the beginning of an exciting night, the couple added one more thing special to Utah, High West Distillery. Their infamous whiskey was poured for guests during the cocktail hour (alongside charcuterie, of course) to help keep the guests “spirits” high!

Food, open bar and the band were the top 3 items for the wedding party.  The groom is a big foodie, which led to a fun menu, packed with elements all a little out of the ordinary. They chose High West to cater for their dinner as well. “Their fried chicken was a must,” said Brittany. They decided to serve it up family style so guests could get a little taste of everything. Ditching the cake tradition, Brittany and Justin had an ice cream sandwich station from The Baked Bear for the guests to indulge on , as well as a S’mores bar outside all night!

Brittany’s dress beautifully complimented the whole mood of the wedding with beige and blush beneath the tulle, making it elegant but relaxed, just like she wanted her wedding to be.  When finding her gown, Brittany had her mom and mom-to-be by her side. Though she wasn’t feeling excited at first, the moment she put on the one.. everything changed, and she found her dress in the first day of looking. “I went out to show them and everyone started tearing up, I knew it was the one!” 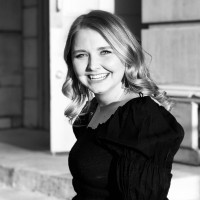