Melissa and KB met at a party when Melissa was a freshman in college. Two years later, KB popped the question and the two have been partying side-by-side ever since.

As it turns out, this union is the gift that keeps on giving. After almost three years, Melissa and KB chose to grace us with a fresh new take on their nuptials.

“I think it’s important to do anniversary sessions, to remind each other of our vows and to reflect back on the most important day of our lives together.” Because the couple’s Atrium Gardens wedding had been neutral and elegant, Melissa wanted to make this shoot wild, modern and fun with twists on their chic style. UltraViolet Studios was the perfect fit, offering a simple background that would make these new, vibrant and vibing aesthetics pop.

The duo’s wedding colors were gold, lavender and burgundy, so Melissa chose brighter, more lively versions for this shoot: bright oranges and violets electrified her bouquet and KB’s salmon-colored suit brought a touch of modern flair. Melissa’s jumpsuit is a contemporary, runway-ready take on her wedding gown.

The pair finished off the shoot smiling ear-to-ear as confetti rained down above them.

“The confetti was my favorite part of the session because we were genuinely laughing and having fun,” Melissa explained. “For me, there’s no better way to capture memories than documenting each anniversary we celebrate through photos together.  And, when the photos are this good, we couldn’t agree more! 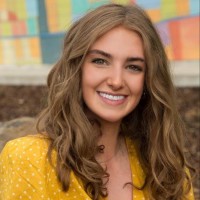