Katherine and Paul met through mutual friends and dated a year and a half  before Paul popped the question while the two were vacationing in Italy. “On the last day of our stay, Paul planned to take me on a private boat ride and tour around the islands of Lake Maggiore,” Katherine says. “We were not five minutes into the ride when he asked to take a photo in front of the gardens of Isola Bella. On the bow of the boat, he got down on one knee and proposed.”

“Early in our relationship, we ventured up to Park City for a weekend of snowboarding and time together,” Katherine says of the trip that solidified their relationship and later became the locale of their destination winter wedding. During the days leading up to the wedding, their guests played in a variety of ways: snowmobiling, skiing, snowboarding, a spin class at Boom Cycle, spa time at the St. Regis, and trap shooting and whiskey tasting at High West. Their hosted 40-person rehearsal dinner was held at Bill White’s Farm. Blue Sky Ranch hosted the wedding day—a natural fit for the Kentucky-native bride and the groom who spent childhood summers on a family ranch in Northern California.

“For our winter wedding, we wanted the theme to be whimsical, ethereal and magical,” says Katherine, describing the celebration’s elegant and rustic style. “Every little detail equated to a show-stopping wedding. The Blue Sky barn, the lighting, floral designs and drapery made it all spectacular.” Katherine’s co-workers provided the artwork and paper goods for the couple’s signage. Shotskis and glow-in-the-dark props amped the festivities.

“Culinary Crafts worked with me and Paul to create an unbelievable menu that really catered to our exact needs and desires,” Katherine says. The menu featured duo-petite entrees of Rocky Mountain red trout with Utah green apple chutney and beef tenderloin with shallot pan sauce, served with carrot bundles, browned butter and sage gnocchi with Utah corn and wild mushrooms. “Paul is a dessert aficionado, and we decided that instead of a cake, we would just have desserts for people to pick and choose and have all the options they wanted.”

“Groove Merchants was an absolutely amazing band. We had the best time and everyone spent the night on the dance floor. Had they continued to play, people would have stayed until 5 a.m. dancing! I still have people telling me today how unbelievable the band was the entire night,” Katherine says. The newlyweds chose Clint Black’s “When I Said I Do” for their first dance.

The couple honeymooned six months after the wedding. “We went to Uganda, Kenya and Mauritius,” Katherine says. “We spent the first four days of our honeymoon in Uganda and Kenya as part of a mission group visiting and helping certain ministries that are tied to our church including Loving Hearts Babies Home and Free Wheelchair Mission.” 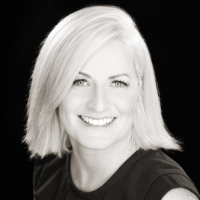